EBA made clear in their final draft of the RTS that SDD is not part of their regulation:

“In relation to payment instruments, and as stated in the CP, the EBA understands that Article 97(1)(b) applies to electronic payments initiated by the payer, or by the payer through the payee such as credit transfers or card payments, but does not apply to electronic payments initiated by the payee only. Given Article 97(1)(c), an exception is a transaction where the payer’s consent for a direct debit transaction is given in the form of an electronic mandate with the involvement of its PSP. The different types of payment instruments include e-money payment transactions. For instance, credit transfers include e-money transfers.”

“With regards to direct debits, the EBA notes that they are out of the scope of the RTS as they are initiated by the payee.”

Even though the Commission has communicated its intention to amend to the RTS there is no comment on direct debit and SEPA DD mandates.

My conclusion is that PayPal, Amazon Payment, and SEPA DD will be pushed by many online businesses as UX with 2FA for credit card will drop conversion.

And even click-mandates seem to survive: So as a result of PSD2, we will observe concentration in online payment and more insecure direct debit payments – not exactly what was intended by the EBA.

Use our new SDK (iOS and Android) for mobile IBAN entry. We used our experience from a project with Fraunhofer IPK and liveIDENT.com in recognizing holograms from id cards.

But why does it work so fast and seamless? The answer is easy. Optimized computer vision code is executed on the mobile device itself. So there is no picture or video sent to a server and you’re not dependent on network bandwidth.

We love it. You’re gonna love it too. Try it now. Send an email to [email protected]

The European Central Bank (ECB) has published Oct 15th the 2014 statistics on non-cash payments. Surprisingly the number of direct debits transactions were declining by almost 12%  in the Euro area to 17.8 billion. That was the first time since the ECB is measuring this data:

So let’s have a look where the changes are coming from: 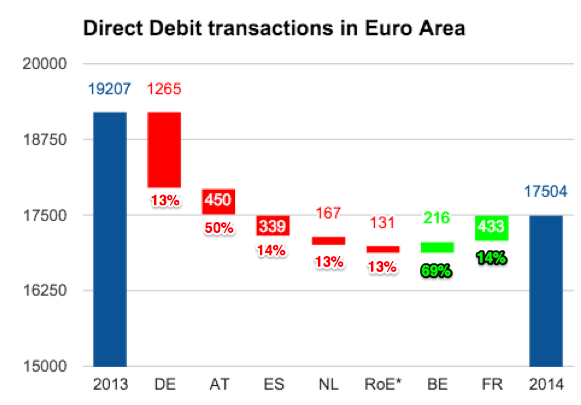 3/4 of the effect comes from Germany 1/4 from Austria. France and Belgium cover for the other countries losses. Slimpay managers told us that growth in France came from checks being banned from some business areas. Especially growth of 69% in Belgium is remarkable. But what happened to Austria with a 50% decline?

Let’s dig a little bit deeper into Germany and Austria. Relative importance of direct debit is melting down: 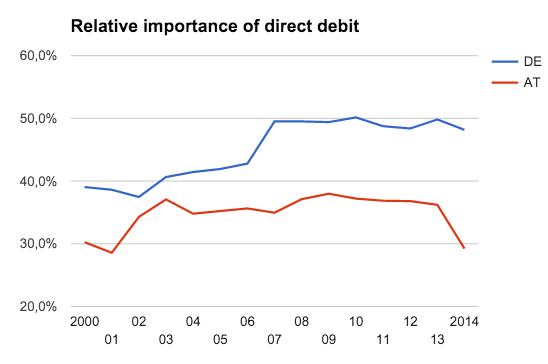 Some market participants argue credit card transactions are coming back because of lower interchange fees. This might be a valid argument. But it would be much to early to find in 2014 numbers. The contrary is true since also card transactions declined by 8% in 2014 in Germany and Austria.

We have asked the Austrian Central Bank for statistical explanation to the 50% decline in direct debit transactions. They seem not to know the reason and doubt that the 2013 numbers where right because they where sourced by a 3rd party, partly wild guessing the figures.

The central bank’s 2014 report does not comment on the issue. The ECB categorizes the Austrian SEPA migration with “minor resolvable issues” which sounds euphemistic. We have to state that SEPA migration or stats failed in Austria. Financial institution did not offer their clients a smooth path to a well working European payment scheme.

But it’s unfair to point at the banking system only. We have observed that merchants and payment service providers where suffering from regulatory uncertainty about how to receive a direct debit mandate. We didn’t see much improvement in direct debit payment solutions in the industry (excluding perhaps Paydirekt, GoCardless and a Stripe balloon test).

Our hope is that we will see a recovery in 2015 and 2016 numbers since the German regulator announced Oct 30 2015 in a FAQ document, that mandates can be received in the future as we know it – with a klick in a checkbox.

Concerning E-Commerce payment behaviour in Germany today we have a closer look at the 2014 EHI Retail Institute numbers.

German E-commerce buyers prefer payment upon invoice since many years. This is no news. 28% of E-Commece Revenue is payed after delivery by bank transfer. This might be secure and cash saving for buyers but expensive for merchants. Invoice is by far more expensive if you include direct and indirect costs as debtor management and default. IBI Research has calculated more than € 8 per transaction (Source: Total costs of payment methods 2014).

The real news is that direct debit is growing fastest with 13% (or 2.5% points) to 22% overtaking PayPal (20%). Direct debit is now no 2 preferred payment method in E-Commerce. This is great for merchants because direct debit is cheapest payment method after Sofort Überweisung. IBI calculates under € 2 per transaction for Sofort and € 4.41 for direct debit. With SEPAone we think we can lower these costs to a level around € 2.50 for small merchants, undercutting credit cards and PayPal by far.

But why is direct debit rising now? There is no marketing campaign for direct debit. One argument discussed at the EHI Card Congress in Bonn last week was that regulatory uncertainty around SEPA is now over and merchants now invest in optimizing their payment portfolio. This sounds plausible to me. The number of top 1000 merchant, offering direct debit, increased 2014 compared to 2013.

Another strong effect might be the Amazon effect. Amazon uses direct debit as their main payment method and Amazon revenue is waited strongly in the top 1000 E-Commerce EHI numbers.

So let’s do it like Amazon and offer direct debit to our buyers.

May 5th 2015 German Regulator, BaFin has published Minimum Requirements for the Safety of Internet Payments. They are just a translation of the Guidelines on the security of internet payments published by European Banking Authority (EBA) and far behind the original BaFin draft. Nevertheless the published circular letter dos not clarify, if online direct debit will remain compliant.

The letter refers to “E-Mandates” and not to so called Click-Mandates. So our understanding is that a mandate can be given by a click only. But our clients are irritated. Hence, we ask the German Ministry of Finance and the Bundesbank to clarify once more as they did in September 2013.

Semi official clarification was published by BaFin saying that merchants can continue pulling generating mandates with a click but regulated PSPs are forced to do a two factor authentication. In addition we herd that BaFin might not force MaSI before PSD2. So Germany is following UK. What does that mean in practice? SEPA direct debit online and mobile is safe at least for another two years.

The Deutsche Bundesbank recently released data on the implementation of SEPA Direct Debit by all the Banks across the member states. We analyzed this data and here are our key findings:

END_OF_DOCUMENT_TOKEN_TO_BE_REPLACED

In 2012, Europe accounted for close to EUR 312 Billion in eCommerce sales. The Western European region, including Belgium, France, Ireland, Luxembourg , The Netherlands and the UK, was in the 1st position for e-commerce size, with a 51% European market share. The total B2C eCommerce sales of W.Europe closed at EUR 160 Billion, a 20% growth compared to 2011.

END_OF_DOCUMENT_TOKEN_TO_BE_REPLACED

SEPAone is a SEPA Direct Debit enabler. Our focus is on providing Payment Service Providers (PSPs) and Merchants with the proper tools, so they can offer Direct Debits to their clients. Think of SEPAone as Stripe for Direct Debit in Europe. We have created a simple way for businesses to set-up and accept Direct Debit payments over the internet and through multiple platforms.

END_OF_DOCUMENT_TOKEN_TO_BE_REPLACED

There are 2 ways to set up SEPA Direct Debit for your business.

a. Do it yourself
b. Use a Direct Debit enabler, such as SEPAone

There are various steps to be taken and technological processes to be implemented before you can successfully start using SEPA Direct Debit for your business. We have outlined below what the process might look like for you. Please note that the process may vary based on your location and government regulations.

END_OF_DOCUMENT_TOKEN_TO_BE_REPLACED

In the current payment system, businesses face a lot of difficulties in collecting payments from other SEPA countries. Due to the differences in payment models, these payments often require different formats and data elements. Taking these payments is usually expensive and time consuming.

The SEPA Direct Debit scheme simplifies the collection of payments across multiple countries, by defragmenting the payment procedures. This will allow customers as well as businesses to make payments across the SEPA member states just as they make domestic payments.